(Reuters) - Stefanos Tsitsipas did not leave the court but required some time to replace a worn out pair of shoes during a 6-3 6-4 win over Nick Kyrgios on Saturday in Boston to give Team Europe a 5-1 lead over Team World in the Laver Cup.

Tsitsipas came under scrutiny at the U.S. Open for both the timing and length of his mid-match bathroom breaks that critics considered unfair gamesmanship but this time he was in control of the match and had a clear reason for the stoppage.

Early in the second set Tsitsipas interrupted his own service game at 15-15 and took several minutes installing new laces before ultimately deciding to put on fresh shoes given the original pair did not stand up well to the indoor surface.

"It's not the best advert for the shoe I guess, but look at it, it's absolutely battle weary from the amount they slip and slide around," the Eurosport commentator said.

"I wonder if Kyrgios is tempted to say something like, 'Is this going to take about eight minutes? What's going on here?!'"

When play resumed Tsitsipas used his serve to overwhelm Kyrgios and control the rallies before ultimately sealing the win with a solid forehand passing shot.

American John Isner will try to get Team World back on track when he faces Germany's Alexander Zverev in the second match of the day session. 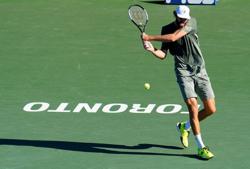