(Reuters) -Fourth seed Andrey Rublev churned out another win as he overcame qualifier Nikoloz Basilashvili 6-1 3-6 6-3 to reach the final on the Halle grasscourts on Saturday.

The fourth-seeded Russian dropped his first set this week on the grass but responded to ease through a deciding set.

Rublev claimed his 33rd match win of the year - second only to Greek Stefanos Tsitsipas (39) on the ATP standings.

He also took his match record in ATP 500 events to 29-2 since the Tour resumed last year after the coronavirus shutdown - a period in which he has won four titles at that level.

"It's my first final on grass and in Halle," world number seven Rublev said. "I think I can play on every surface and I will try my best again tomorrow."

Auger-Aliassime beat Umbert in Stuttgart last week but this time the tables were turned as the Frenchman prevailed.

It perhaps should have been easier as he led by a set and a break and had points for a 4-1 lead before his Canadian opponent began to find his range.

Umbert also failed to convert a match point at 5-4 in the third set but got the job done in the tiebreak. 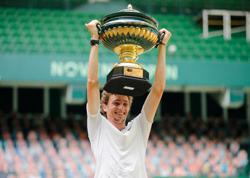