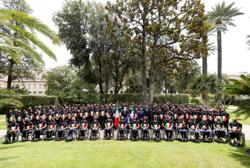 LONDON (Reuters) -Andy Murray's grasscourt return was cut short in brutal fashion at Queen's Club as Italian top seed Matteo Berrettini dished out a 6-3 6-3 defeat to the former world number one on Thursday.

The 34-year-old two-time Wimbledon champion, playing in his first singles tournament on grass for three years, could not handle the ferocious pace of Berrettini as he slid to defeat.

Murray eased past Benoit Paire in his opening match on Tuesday but world number nine Berrettini was too big a step up.

Berrettini's huge first serve and forehand did most of the damage but the Italian also showed plenty of silky touch on the slick lawns to register his first career win over Murray.

Berrettini, 25, finished the match off with a powerful hold of serve, banging down four massive first serves before sealing victory with a clubbing forehand winner.

He faces British number one Dan Evans in the quarter-final after Evans beat Frenchman Adrian Mannarino.

Murray, a five-time winner of the traditional warm-up event but now ranked 124 after long battles with hip injuries including resurfacing surgery in 2019, has been handed a wildcard for the Wimbledon championships.

Apart from a slight groin niggle, Murray said he was reasonably happy with his condition, considering this was only his third Tour-level tournament of the year.

"I think obviously I need to improve," Murray told reporters. "I actually felt my movement was actually quite good for both of the matches. My tennis today was not very good today. That's the thing that I'll need to improve the most.

"I felt like today that that sort of showed my lack of matches."

Spanish veteran Feliciano Lopez, who won the singles title in 2019 and the doubles alongside Murray, was beaten 6-2 6-3 by Canada's Denis Shapovalov.

(Reporting by Martyn HermanEditing by Toby Davis and Pritha Sarkar)