(Reuters) - American teenage prodigy Coco Gauff says she is spending less time on social media now as she focuses on charting her own course to success in tennis.

Gauff has been in the spotlight ever since her astounding run as a 15-year-old at Wimbledon in 2019, where she knocked out her idol and five-time champion Venus Williams after becoming the youngest player in the professional era to survive the qualifying draw.

Her dream run at the grass court Grand Slam continued until the fourth round, and the following year she reached the same stage at the Australian Open on the hardcourts of Melbourne Park.

Expectations for the now 17-year-old Gauff have remained high, and she is constantly trying to live up to them.

Part of that entails focusing on her tennis more and social media less, she told reporters at the WTA 500 event in Charleston.

"I think I was just trying not to be on social media as much because a lot of people have opinions on you and how they think you should play," Gauff said.

"But I think it's important that you focus on your journey, your path, and you're going to have a different path than other players. That's what I've been working on lately, is just focusing on my journey and my path."

African-American Gauff also emerged as a leading voice in the fight against racial injustice in America last year.

Gauff, currently ranked 36th in the world - one spot below the career-best ranking she reached last month, said she is ready to be patient in her bid for success.

"I think you want results to happen fast, but I'm also still developing my game and figuring out how I want to play on the court and how I want to construct my points," she added.

(Reporting by Sudipto Ganguly in Mumbai; Editing by Hugh Lawson) 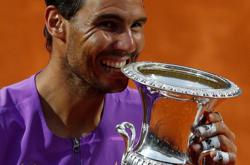