I’ll be back: Hoe Yean has a higher chance of booking a final spot in the 200m backstroke.

COMPETING against three Olympic Games champions in an event is a priceless experience for anyone – more so for debutant Khiew Hoe Yean.

The 19-year-old swimmer enjoyed the experience of a lifetime although he missed out on a second final spot when he finished 11th overall in the men’s 200m freestyle heats at Sandwell Aquatics Centre yesterday.

The last heat of the event was won by reigning Tokyo Games champion Tom Dean of England.

Dean came in at 1:47.19 ahead of former Olympics champion Mack Horton of Australia, who took bronze in the 400m freestyle on Friday.

Matthew Richards, who swam the third leg of the gold-medal winning 4x200m freestyle relay for Britain at the Tokyo Olympics but is representing Wales, came in third in 1:47.59.

Hoe Yean had no regrets despite failing to break into the top-eight final.

“It has been a very good experience in my events so far. I learnt a lot in terms of controlling my emotions and competing in a packed venue.

“It was also something I’ve never experienced before being in the same pool with all these Olympics champions. I still have more events and I will not give up,” said Hoe Yean, who still have the 100m freestyle and 200m backstroke to look forward to.

It is in the 200m backstroke where he stands a higher chance of earning another final appearance.

Hoe Yean is the national record holder with 2:00.80 set in the Malaysian Open in June last year. 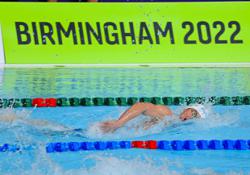