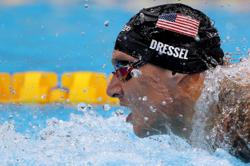 One of a kind: Caeleb Dressel (left) of the United States celebrating with Hungary’s Kristof Milak after the men’s 100m butterfly final at the Tokyo Aquatics Centre. — Reuters

TOKYO: Caeleb Dressel is pretty much invincible when he has a lane to himself.

But give him a deficit of more than eight seconds?

Well, that’s too much for even the world’s greatest swimmer to overcome with two laps of the pool.

On a morning of mixed emotions and chaotic racing at the Tokyo Aquatics Centre, Dressel set a world record in the 100m butterfly, but was basically doomed before he even dove into the pool on the new mixed relay yesterday.

So went his chances of joining a very exclusive club. His bid to win six gold medals fell apart with another United States relay debacle.

The Americans were too far behind in the 4x100m mixed medley when their top swimmer took over, so the best Dressel could do was rally the US to a fifth-place finish in an event that features two men and two women on each team. Britain set a world record to win the gold.

It was a disappointing capper to a golden morning for the Americans, whose biggest swimming stars both ascended to the top of the medal podium.

After Dressel won his third gold of the games, Katie Ledecky closed out her gruelling Olympic programme with a third straight victory in the 800m freestyle.

Ledecky was pushed hard by Australian rival Ariarne Titmus, but the American held on in a race she hasn’t lost since 2010.

Ledecky finished up with two golds, two silver and a fifth-place finish at the Tokyo Aquatics Centre – not as successful as she was five years ago in Rio de Janeiro, but not bad at all.

Ledecky became the first female swimmer to capture six individual gold medals in her career with another Olympic title in the 800m freestyle, winning with a time of 8:12.57.

“I could see her the whole way,” Ledecky said of Titmus.

“I was trying to keep tabs on her and trying to inch my way out a little bit each 50. I knew she was just going to be lurking there the whole time.”

Ledecky lost her first two individual matchups with Titmus, but finally beat the Terminator in their final showdown.

“I knew I had to have a little gap,” Ledecky said, “because if we were neck and neck on the last 100, I know she has that finish.”

Dressel led right from the start in the fly and held off Hungary’s Kristof Milak to touch in 49.45, breaking the mark of 49.50 that the American set at the 2019 World Championships.

Milak, winner of the 200m butterfly, earned the silver with a blistering 49.68. The bronze went to Switzerland’s Noe Ponti.

When he saw the “WR” beside his name, Dressel smiled and joined hands with Milak in the lane next to him. They raised their arms together before Dressel flexed his left arm and pumped it in the air.

“He’s going to put me out of a job one day, so I’m just trying to hang on as long as I can,” Dressel said.

“Kristof executed perfectly. We both swam exactly the race we needed to.”

The Australian women added another gold.

Kaylee McKeown completed a sweep of the backstroke events with a victory in the 200m butterfly. Her winning time was 2:04.68.

It’s been a huge Olympics for the Aussie women. They have won six of their team’s seven gold medals at the pool.

The mixed medley was another story.

For the second time at these Olympics, the US failed to win a relay medal, joining a fourth-place finish in the men’s 4x200m freestyle. Before Tokyo, the Americans had never failed to finish in top three of an Olympic relay they entered. 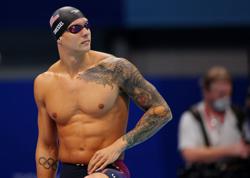 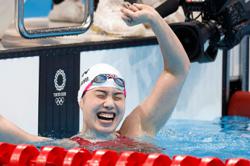