PETALING JAYA: Teen sensation Khiew Hoe Yean is simply unstoppable as he capped off a superb week at the Malaysian Open swimming championships with another national record.

And he did it in style as the record fell in his first attempt in the men’s 800m freestyle.

Despite swimming alone, the 18-year-old managed to clock 8:06.00 at the National Aquatic Centre in Bukil Jalil yesterday to erase Welson Sim’s previous mark of 8:08.77 in 2019.

Hoe Yean did better than his previous personal best of 1:51.26 and it earned him another OST as his effort was well under the 1:50.23 qualifying mark. Hoe Yean was delighted with his performance after netting four personal bests on his first return to competition since the National Age-Group Championships in March last year.

“It feels great. It’s my first time swimming the 800m free but my target was to break the record. I was however surprised but satisfied with my 200m free,” said Hoe Yean.

“Every single competition is real even though there’s no spectators or competitors. I will always take every meet seriously.

“I’m very pleased because I showed improvement each day and ended the meet with four personal bests. I will build on it!”

Hoe Yean has just given Malaysia Swimming (MS) a good reason to pick him instead of Welson for the Olympics.

Currently, Welson and Phee Jinq En are the only Malaysian swimmers who have made the OST list based on their results at the 2019 Sea Games in the Philippines but the national body intend to use the universality places allocation, where they can recommend one male and female.

Asked if he harbours hope of securing his Olympics debut, said Hoe Yean: “ I don’t know about it but I believe I have done my best by swimming as fast as I can. The rest is beyond my control.” 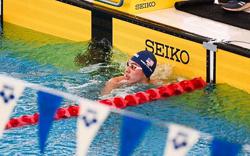