Men’s doubles falter in semis too

IT was close but yet so far for men’s doubles pair Ng Eain Yow-Ivan Yuen.

The squash players fell short in their bid to reach the men’s doubles final when they were shown the exit by top seeds James Wilstrop-Declan James of England.

Despite taking a 7-4 lead in the third game, Eain Yow-Ivan allowed Wilstrop-James to come out of jail to confirm England the gold.

Their teammates Adrian Waller-Daryl Selby had earlier booked their place in the final after beating Sottish pair Greg Lobban-Rory Stewart 11-8, 8-11, 11-6. 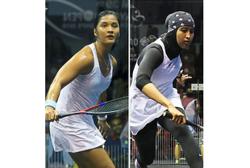 Tall order for Eain Yow to seize the Momen in home tourney
Malaysia’s defence of Asian Team crown in jeopardy
Defeat in San Francisco fuels fire in Rachel for future meets
No pressure as Rachel cruises on
Uphill task in depleted Malaysia’s defence of Asian team titles
Rachel fancies chances of breaking into world’s top 30 by year end
Aifa gets thumbs up, ready to do battle in US
Vincent-Amir take down top two seeds en route to historic gold
Dream double dashed but Yiwen hopes to win bronze with Ainaa
Rachel’s fine run comes to an end