PETALING JAYA: It’s always a daunting task playing an Egyptian player on her own turf but the in-form S. Sivasangari may have something up her sleeves to outplay Nadine Shahin and claim a spot in the last 16 of the World Championships in Cairo today.

Sivasangari has yet to beat Nadine in their last four meetings but the Malaysian has been brimming with confidence since reaching the final of the Carol Weymuller Open and almost toppling world No. 10 Olivia Fiechter of the United States in the Tournament of Champions last month. Both tournaments were held in New York. 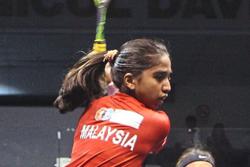