Wee Wern turns down SRAM offer, will seek own funding 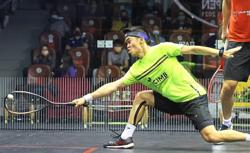 Wee Wern: 'I'm an ethical person, not an opportunist.'

PETALING JAYA: National squash player Low Wee Wern will look for her own funding after turning down an offer from the Squash Racquets Association of Malaysia (SRAM) president Gerard Monteiro.

The 31-year-old Penangite revealed that Monteiro was willing to help her financially as she is currently recovering from a knee injury.

“Two weeks before the end of 2021, Gerard called to say that I was dropped. And he was quick to offer assistance despite the short notice,” said Wee Wern.

“Gerard is the kind of president who truly assumes the role of a leader.

“He always looks at how to resolve issues whether it’s financial or otherwise. He is the best thing that has happened to SRAM.

“Many do not know the amount of money he has personally spent to support not only players, coaches and staff but also the squash programmes in the other states.

“I know Gerard is sincere in offering me financial support but I understand the magnitude of his undertaking.

“He is not Superman. He has a family to take care of and businesses to look after.

“I cannot accept the solution he proposed at his own expense. If I did, I would be setting a bad precedent of taking advantage of the situation.”

She said her plan now is to seek corporate sponsorship.

“I’m an ethical person, not an opportunist,” she stressed.

Wee Wern, whose contract ended on Dec 31, was among 10 players dropped from SRAM following the National Sports Council’s decision to downsize full-time athletes from 432 to 288 due to budget cuts.

They believed they had given ample time and rehabilitative care to Wee Wern before removing her from the Podium Programme.

“I know for sure I was not blessed with perfect knees but it did not stop me from training to become a successful player.

“I am a professional and I want to return to represent my country, sport, sponsors, NSC and the association on the world stage.

“Are the injuries that I sustained a negative sign to sports and NSC?” she asked.

“As a professional, I’ve never abused the system.

“I represented the relevant stakeholders to the best of my ability on and off the court.

“For me, it’s not about the money. It’s the ethics and principles behind the decision that I question.”

Wee Wern is now based in Penang and coached by Aaron Soyza. She has another three months of recovery to focus on before she gets back on court.

“I’m lucky that I still have my coach and physio with me while others who were also dropped have lost that support system.

“I’m glad that SRAM and the Squash Racquets Association of Penang are helping me out. I am fortunate.”

Eain Yow needs maiden win over Egyptian to progress at El Gouna
Ajaz says squash in Egypt is like badminton in Malaysia
Sangari wiser after defeat at world meet
Sangari fails to free herself from Black Widow’s web
Squash: Sivasangari crashes out of World Championships in Cairo
Sivasangari needs to go the distance to upstage El Tayeb
Sivasangari finally beats Nadine to move into last 16
Sivasangari plots Nadine’s downfall on Egyptian’s own turf
Sivasangari goes through but Aifa, Rachel and Eain Yow fall at worlds
A great show in Cairo will mean the World to Sivasangari