PETALING JAYA: Rachel Arnold’s disappointment in the semi-final was remedied in her most crucial match to date.

The captain of the Malaysian women’s team was instrumental in steering the win 2-1 over defending champions Hong Kong in the Asian Team Squash Championships final.

“It’s good to compete in a team meet and do well because it’s been a while since we played together,” said Rachel.

“It’s a good change of pace rooting for your teammates compared to playing in individual competition. I was disappointed with myself after the semis. I tried not to think about it and so glad I did much better today.

“It was really tough coming back in the first match after a tough defeat but the team helped me through it.”

Buoyed by the women’s success, the men stepped up with a hard-fought identical 2-1 win over top seeds India.

India were, however, not going down without a fight and Mahesh Mangaonkar tied the score beating Syafiq Kamal 11-9, 11-7, 11-8.

“It was never easy playing in the decider as India is a very experienced team,” said Ivan.

“Today, we just went in there to play our game and to fight for every point and I played to the best I could.

“I had my injury concerns earlier this year but am so glad that I managed to sort that out.

“Everything is definitely going right for us now.”

The win is the men’s fourth title but their first since 2008. It is also the first time since 2008 that Malaysia did the double in the event. 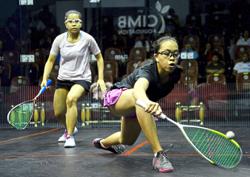