She should go far: Aifa Azman is the top seed in the women’s event

PETALING JAYA: The absence of top players will not take the shine away from the SRAM PSA 5 scheduled from Sept 28-Oct 2 at the National Squash Centre in Bukit Jalil.

Some of the top players who will miss the action in the men’s competition are Addeen Idrakie and Mohd Syafiq Kamal, who will be competing at the Equinox Boston Open, the United States, in the same week.

The top stars to skip the women’s competition are Rachel Arnold and Low Wee Wern.

In the absence of the seniors, SRAM PSA 1 men and women champions Ivan Yuen and Aifa Azman are seen as the favourites but Maniam believes there are a few others with potential who can upset the form book.

“Ivan is the favourite and others will have to make a great effort to beat him,” said Maniam.

“But I believe the likes of Darren (Rahul Pragasam), Ong Sai Hung and Daniel Nurhaqiem can give a good fight and pull off something special in this tournament. I am sure there will be great match-ups until the final.”

Maiam said the competition in the women’s event would be more open as there were a host of youngsters waiting to snap at the heels of world No. 65 Aifa. 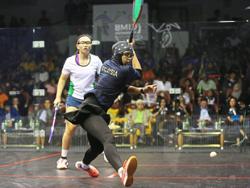