The men’s and women’s Asian team meet, originally scheduled to be played at the National Squash Centre in Bukit Jalil in March, will now be held in November at the same venue.

There women’s world team championship will be held as scheduled at Bukit Jalil from Dec 15-20.

Squash Racquets Association of Malaysia (SRAM) director S. Maniam (pic) said that 15 players have already started training on squash courts and players from outside Kuala Lumpur and Selangor will report for training on July 5.

“At the moment, the players are only allowed to train solo as coaches are not allowed on the courts.

The good news is that they will get to feature in the two tournaments that we are hosting at end of this year, ” said Maniam.“We are waiting for the Asian Squash Federation to gives us the green light to host the events and hope Asian countries will allow their players to travel for the meet.”

He added that they would also organise a CIMB carnival for junior players in December as part of preparations for the British Junior Open in Birmingham from Jan 2-6. 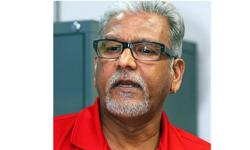