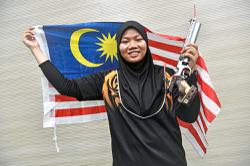 A STAR is born.

First, she beat three-time Olympian and six-time SEA Games gold medallists Tanyaporn Prucksakorn of Thailand and then went on to smash the SEA Games record and all these in only her debut.

She fired 239.3 points to better the old mark of 234.8 points at the National Sports Training Centre.

Throughout the final, the 19-year-old was calm and steady.

Coach Firdaus Abdul Rahim wants her to step up and Syasya, who was a taekwondo exponent during her schooling days, has vowed to climb up the ladder.

She hopes to being her positive mindset to the Asian Games in Hangzhou, China next year, and hopes it will then lead her to her first Olympics in Paris.

“I believe under coach Firdaus, I can achieve more and bring honours to the nation. I still have lots of time to be better.

“My ambition is to win many medals for my country in all the Games,” said Syasya.

“Olympics is the ultimate dream. The SEA Games is just the beginning. It will spur me to greater heights, but I must remain humble in whatever I do.”

Other youngsters like Haritz Iklil Hessly Hafiz and Alia Husna Budruddin did not win any medals but showed promise in Hanoi.

The 21-year-old Haritz had entered the competition with the hope of winning a bronze, but he missed the mark to finish fourth in the 10m air rifle with a score of 203.2 but promised to grow stronger from the experience.

Alia, 21, was also close to a bronze when she finished fourth in the 50m rifle three positions event with a score of 425.8.

Alia, Haritz and Syasya have signalled a promising future, but one should not rule out the veterans of the game too.

Johnathan Wong, 29, who contemplated retirement after the 2019 Manila SEA Games, showed he still meant business with a gold in the 10m air pistol. Alia Sazana Azahari, 30, missed out on the 25m pistol gold by just one point. 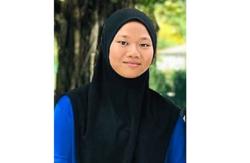