PETALING JAYA: National coach Yusri Jusoh is quite happy with the positive mood at the shooting range.

The morale is high after the national shooters had participated in three online events organised by Indonesia and a Singapore competition over the last two months.

Yusri not only saw the team being in high spirits, but also good progress.

“These tournaments have reduced stress in the team. Instead of just training and training, the shooters were competitive in the virtual world, ” said Yusri.

“They’ve been shooting with some good scores and I’m happy to see their progress.

“Even though the online meets are not official, our shooters kept pace with some of the best shooters in the region.

“Alia Husna (Badruddin), for example, scored 1,155 in the rifle three position in one of the meets. She unofficially broke the national junior record of 1,153.

“Johnathan (Wong) scored 583 in the 50m air pistol, which to me is a very good score. Newbie Nurul Syasya (Nadiah Ariffin) unofficially equalled the national record for 50m air pistol by scoring 574.

“Our shooters are always in the top five of the qualifiers list. It’s positive. It shows that the shooters want something.”

Yusri is hoping that the National Shooting Association of Malaysia (NSAM) would also organise online events.

“We are hoping for the official tournaments to resume but while waiting, we’ll continue to gauge our form via online tournaments.” 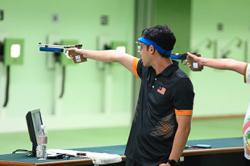