Predicting the unpredictable’s a compelling game 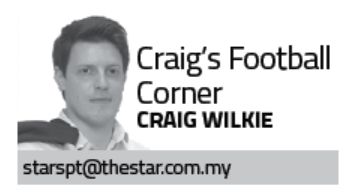 THE World Cup is now a distant memory and the English Premier League is back. Supporters everywhere begin a new season with hope, although it will be easier to sustain for some than others.

It’s only the second round of games but some predictions can be made about how the season will turn out.

Firstly, are Manchester City invincible? Not quite, but they start the campaign as heavy favourites to retain the title. The fact that they conceded a goal to Huddersfield from a long throw suggests they still have some defensive vulnerabilities but going forward they are almost impossible to contain.

Incidentally, why doesn’t every team have a long throw specialist?

City scored six against Huddersfield with Aguero getting a hattrick. In truth, the Argentinian could have scored six himself, such was his side’s dominance. The loss of the injured Kevin De Bruyne for several months is a blow but the squad are the most capable in the league of absorbing that misfortune.

Who will lead the chasing pack? The early indicators and summer signings suggest that it will be Liverpool (full disclosure: I’m a Liverpool fan). Juergen Klopp has finally signed a world-class goalkeeper in Alisson, Naby Keita adds dynamism to the midfield, while both Fabinho and Xherdan Shaqiri bring greater depth to the squad.

Liverpool have been the kryptonite to City’s Supermen in recent years but have tended to struggle against weaker sides that set out to frustrate them. The manager will have to display greater tactical flexibility – their plan A is magnificent when it works but plans B and C are still a little lacking.

Who’s got the best new manager? Both Arsenal and Chelsea are under new management and this will prove a transitional season for them. I think Chelsea have done the better business in that department and my view is not simply based on the opening couple of results.

Maurizio Sarri arrived at Chelsea from Napoli, who played some of the most attractive football in Europe last season. He’s already stamping his identity on Chelsea and his new team look comfortable in his preferred style of play.

Another prediction: Mateo Kovacic will turn out to be the best signing of the summer.

It looks like it might take new Arsenal boss Unai Emery a little longer to get his ideas across. Defensively they were a shambles against Chelsea but he’ll take heart from the number of chances his team created.

I expect Chelsea to finish in the top four but Arsenal will likely miss out again.

At the other end of the table, what are the prospects for Tan Sri Vincent Tan’s Cardiff? Any promoted team will content themselves with avoiding relegation and I’m sure Vincent would consider staying in the league a success for this season.

They picked up their first point with a 0-0 draw against Newcastle at the weekend in a game that didn’t exactly enliven my Saturday night. It did prove, however, that outside of the top six or seven teams, the quality in the league drops off considerably and so Cardiff can go into many matches without fear.

Finally, will Jose Mourinho ever smile again? Come on Jose, you’re managing Manchester United – at least pretend you’re enjoying it. Sunday’s loss at Brighton followed a tough pre-season, with Mourinho even claiming of the Liverpool friendly that he wouldn’t have wasted his money on it as a supporter.

Many United fans understand his point; they’ve been feeling that way for a while. So here’s my final prediction at this early point in the season: Jose won’t be managing Manchester United at the end of it.

Milo – tale of a brand that continues to make sweet aroma in Malaysian sport
Pandelela’s World Cup feat should not hide diving’s plunging standard
Time for our male divers to step up to the plate in World Cup
In-form Devils will outshine Reds in entertaining tie
Power of people overpowers greed and racial discrimination in sports
Red-letter day for United and Liverpool
Can Tokyo Olympic Games stand firm on shaky ground?
The new scoring system - a smashing point or a point that needs to be smashed
Great job by Lee, but we must not depend on only one player to bring glory
Hats off to courageous ladies for taking on bigger roles in sports