(Reuters) - Ireland flanker Josh Van der Flier has been named World Rugby's Player of the Year after helping drive his nation to the top of the world rankings through a stellar 2022 season.

"I've been incredibly fortunate to have great team mates and coaches. They've really pushed me on, as well as my wife and my family supporting me a huge amount," the 29-year-old told the awards ceremony in Monaco.

Van der Flier started in all 11 tests this season and scored four tries, including one in the 32-22 win over the All Blacks which sealed Ireland's first series victory in New Zealand and gave them the top ranking.

"Obviously the win over New Zealand would be right up there in terms of rugby," he said of his season highlights.

"But my wife's sitting there staring at me ... and I got married in August so I'd say that probably has to be at the top."

New Zealand women's boss Wayne Smith won Coach of the Year, having turned the side's fortunes around after they slumped to a low ebb in 2021.

Chile flyhalf Rodrigo Fernandez won men's Try of the Year for his stunning solo effort in a World Cup qualifier against the United States when he bolted 75 metres and weaved through six players on a water-logged pitch in Santiago in July.

England winger Abby Dow won the women's Try of the Year for her sensational five-pointer against Canada at the World Cup.

Terry Kennedy claimed another award for Ireland as men's rugby sevens Player of the Year, while Australia's Charlotte Caslick won the women's award.

(Reporting by Ian Ransom in Melbourne; Editing by Stephen Coates) 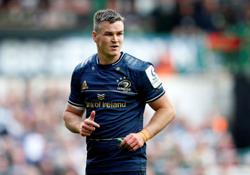