A third change from the side that beat Wales 30-14 in Cape Town last month sees rookie wing Kurt-Lee Arendse come in for the injured Cheslin Kolbe, who is nursing a broken jaw.

Marx will earn his 50th cap, matching the feat of the man he replaces in the starting side, Bongi Mbonambi, who reached that mark last time out against the Welsh.

"He (Marx) is a true warrior and epitomises what we stand for as the Springboks," coach Jacques Nienaber said in a media release from South African Rugby.

"We are preparing for a challenging test which will be vital in setting the tone for our Rugby Championship campaign this year and that is our focus.

"The All Blacks are strong all around and they will come to Nelspruit desperate to avenge their (2-1 home) series defeat against Ireland and to prove that they remain one of the powerhouses in world rugby, so we believe experience and physicality will be vital in this test."

Marx will have props Trevor Nyakane and Frans Malherbe either side of him, while there is an experienced lock pairing of Eben Etzebeth and Lood de Jager.

De Klerk will be alongside flyhalf Handre Pollard, with Damian de Allende and Lukhanyo Am the centres, and a back three of Arendse, Makazole Mapimpi and fullback Damian Willemse.

"They (New Zealand) will play a different style of rugby to Wales, and we have been preparing for that, and like many of the northern hemisphere teams their set pieces are strong and they have fantastic skills in their backline so we’ll have to be at our best to register a win," Nienaber said.

The two sides will also clash in a second Rugby Championship encounter in Johannesburg on Aug. 13. 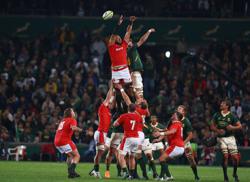