(Reuters) - Grant Gilchrist will captain Scotland for the first time in four years while Luke Crosbie will make his first start for the country in the first test against Argentina at San Salvador de Jujuy on Saturday.

Centre Mark Bennett will make his first start since 2016 having forced his way back into the Scotland setup after last month being named as Edinburgh's Player of the Season.

British & Irish Lion Duhan van der Merwe returns on the wing after being suspended for the last two games of the Six Nations, where Scotland beat Italy away but then lost in Ireland.

Scotland did not take Stuart Hogg or Finn Russell on tour -- electing to rest their two key backs -- and Adam Hastings withdrew because of injury before their departure for South America, so Blair Kinghorn will be employed at stand off, partnering with Ali Price.

Rory Hutchinson starts at fullback, with his last appearance coming in 2020 when he came off the bench against Italy.

After missing the majority of the Six Nations, having picked up an injury against England, Lions prop Rory Sutherland is named on the bench. 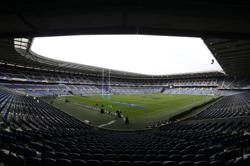