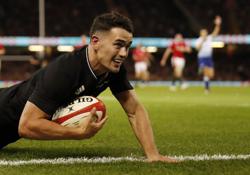 SYDNEY (Reuters) - Scrumhalf Nic White has spurned a lucrative offer from Japan and committed to stay in Australia until after next year's World Cup in a major boost for the Wallabies.

The livewire halfback has been first choice in the number nine shirt since Dave Rennie took over as Australia coach and should win his 50th cap in the July test series against England.

"Nic's one of the best halfbacks in the world and to have him recommit to Australian Rugby is a massive positive for the Wallabies and the Brumbies," Rennie said in a news release.

"He has amazing work ethic, has high expectations of himself and demands the same from those around him. His competitiveness is infectious and he's playing the house down at the moment."

Sporting a distinctive handlebar moustache, White has been in fine form for the high-flying ACT Brumbies in Super Rugby this season with his steepling box kicks and darting runs causing major problems for opposing defences.

"We talk a lot about needing world-class players in your team to compete at the top level and Whitey's in that bracket," said Brumbies coach Dan McKellar.

The 31-year-old had stints in France and England after his first spell at the Brumbies before signing up for a return to Australia in time to play a part in the 2019 World Cup campaign.

While Rennie can select players based outside Australia, he is currently limited to three which would have complicated his selections had White taken up the big money offer from a Japanese club.

White said last week that he had wanted a longer contract extension and felt that he would still be competing for a test jersey when the British and Irish Lions tour in 2025.

"It's been a long process, but my goal has always been to stay at the Brumbies and to continue to earn the right play for my country," he said.

"I'm really happy to be staying at the club and in Australian rugby."