KUALA LUMPUR: Malaysia Rugby are caught in a spot now with uncertainty over the Asian Rugby Championship (ARC).

The ARC was scheduled to take place at the end of next month but it’s now set to be moved to May to a yet-to-be announced venue.

Malaysia, ranked 49th in the world, will take on defending champions Hong Kong (22nd) and South Korea (31st) during the ARC tournament and the winners will meet the Oceania playoff champions to win a slot for the World Cup 2023.

Malaysia Rugby deputy president Amir Amri Mohamad said national 15s head coach Rodney So’oialo, who is tasked with guiding the team for the ARC, will stay on until the competition ends.

“The ARC has been pushed to May but it’s difficult to get a host without a quarantine period as the teams can’t stay for a long period, which increases the cost.

“The good thing is that the ARC must be completed before July as anything later will affect the World Cup qualifications.

“We can only hope that all gets sorted out soon,” said Amir.

Malaysia Rugby thus have no choice but to extend So’oialo’s contract until May.

“We will use his expertise as much as possible. We will have our first centralised camp for the players on Feb 6, where 35 players will be called up.”

Despite the setback, the national body received a shot in the arm after signing a Memorandum of Understanding (MoU) with Kuckreja & Co at Wisma OCM yesterday.

Kuckreja & Co has been a close partner in supporting MR’s initiative and their latest collaboration will see them supplying Gilbert balls as the official ball for the national teams, competitions and National Rugby Development Programme (NRDP).

“We hope this MoU will make a positive impact for MR. We want to thank Kuckreja & Co for the sponsorship,” said Amir after the MoU signing ceremony. 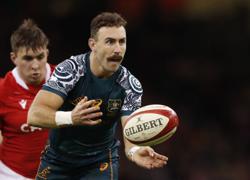