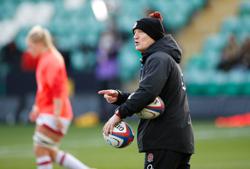 (Reuters) - Australia coach Dave Rennie has apologised for criticising the quality of officiating during their European tour following their 29-28 defeat in Wales after global governing body World Rugby issued a written warning.

A succession of decisions by referee Mike Adamson, his officiating team and television match official (TMO) Marius Jonker left Rennie frustrated https://www.reuters.com/article/uk-rugby-union-wal-aus-idUKKBN2I6020, with the coach defending his decision to go public with his complaints.

"Dave Rennie wishes to apologise to the match officials and to World Rugby for the choice of language used in post-match media commitments following the Wallabies Test match against Wales in Cardiff," Rugby Australia said in a statement on Friday.

"The choice of language and its timing did not meet the standards required from a coach or official in upholding rugby's core values of discipline, integrity and respect.

World Rugby added the sport was based on "trust and respect" with match officials being the "backbone of the sport" and Rennie's comments were "clearly not aligned with these values".

On Thursday, South Africa's director of rugby Rassie Erasmus withdrew his appeal against a two-month ban and apologised to referee Nic Berry for his 62-minute video critique of the match official after the first test against the British & Irish Lions in July.

Australia lost all three games in their European tour this month, also suffering defeats to Scotland and England.