(Reuters) - Coach Mario Ledesma was left to regret a series of missed opportunities as Argentina slipped to another loss in The Rugby Championship against Australia in Townsville on Saturday.

The Pumas remain without a win in the opening five matches in the competition following a 27-8 defeat at the hands of the Wallabies, and Ledesma felt Argentina gifted the Australians too many points.

"The first couple of tries were pretty easy for them, they didn't have to work a lot for them," he said.

"And then we started coming back and at one point we were at 17-8 and at that point we missed eight points with the kicking.

"It's difficult when you're running after the score and you're not scoring."

The Australians held a 14-0 lead inside the opening 20 minutes before Emiliano Boffelli's penalty put the Pumas on the scoreboard.

"We've been trying to improve week in, week out," said Ledesma.

"I think we did, we had a couple of poor games at the start of the championship but the guys were coming back from holidays and in their pre-season they had to play the world champions (South Africa).

"So it's never easy. I'm pretty sure we're building from week to week. One of our goals is to get better.

"It's really easy to put the finger on what didn't work tonight. There's one more week to go and we're pretty excited to challenge the Wallabies again next week."

Ledesma reserved special praise for 23-year-old Santiago Carreras, who continued in the flyhalf role in the absence of the injured Nicolas Sanchez.

"I think even from last week to this week, his kicking game especially coming out of our 50 was pretty good," he said. "I think he's a triple threat, he's pretty interesting." 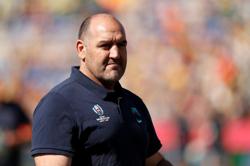