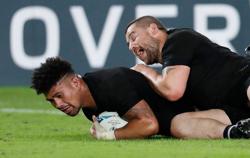 CAPE TOWN (Reuters) - British & Irish Lions centre Robbie Henshaw will be up against a familiar foe when his side tackle world champions South Africa in the first of three tests in Cape Town on Saturday, and is well aware of the physical onslaught coming his way.

Leinster’s Henshaw will go toe-to-toe with Springbok centre Damian de Allende, who plays for Irish rivals Munster, and the pair have been regular combatants in the recent past.

"It’s going to be a huge test but I’ll have a chat after with him as always. He’s a great player and a great guy as well.

"It’s going to be a physical challenge wherever you play, and both centres for the Springboks are very experienced and they’re very physical, so it will be a big challenge and one that we’re really looking forward to."

Henshaw revealed he asked his Ireland international team mate Bundee Aki, who is not involved in the matchday 23, to mimic De Allende in training this week.

"He’s been loving it!" Henshaw said. "He’s been great. I’ve been asking him to give me a hand wherever he can in training. He trained the house down on Tuesday and was unbelievable and he’s just bringing that physicality that we’re going to expect from the Springboks.

Henshaw says the Lions are ready for the kicking game and powerful runners of the Boks.

"We’re massively ready. We’ve done a lot of contact work, we’ve had a lot of games now to date against tough opposition and big men down here. We have to expect a big kicking battle on our hands and big men running at us up front.

"I think it's going to be a huge test for us. They're going to ramp up the intensity further."