MELBOURNE (Reuters) - Australia captain Michael Hooper enjoyed a lucrative stint in Japan during a six-month break from Australian rugby but is not convinced all Wallabies players should have the right to sabbaticals.

The 105-test flanker was allowed a break from domestic rugby in his contract, a rare luxury in Australia where most must play at home to be eligible for the Wallabies.

Sabbaticals have been touted as a way of slowing the player drain to richer offshore markets in Europe and Japan but Hooper stopped short of endorsing them for all.

"I think it's certainly something we should explore, but I'm not saying it's something that should be a given right for players because each player has a unique path and a unique development," Hooper, who recently returned home from a season with Japan's Toyota Verblitz, told reporters on Friday.

"It is a fine balance, we need experienced players to funnel back information and experience to younger players."

Hooper is set to lead Australia into a three-test series against France starting July 7, seven years after being first handed the captaincy against the French after injury to skipper Stephen Moore.

Australia's five Super Rugby sides won a combined two matches against New Zealand opponents in the Trans-Tasman championship but Hooper was unfazed by the dire domestic form, saying he was "impressed" by the development of some players.

The Wallabies' task against France has been made easier, with French selectors unable to bring players who make the Top 14 final due to Australia's strict two-week quarantine for international arrivals.

La Rochelle, Racing 92, Toulouse and Bordeaux are battling for places in next week's final.

The Wallabies were handed a minor boost on Friday with loose forward Lachie Swinton cleared to play France after escaping a ban for a red card over the weekend. 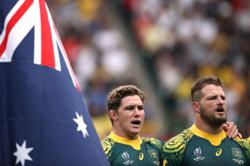