(Reuters) - Darren Childs has decided to step down from his role as Premiership Rugby's chief executive, the organisation said on Wednesday.

Childs, who took up the position in 2019, successfully steered the Premiership through the COVID-19 pandemic, ensuring the completion of the 2019/20 season which was halted for five months.

The Premiership also managed to secure an 88 million pounds ($122.59 million) loan from the government to support clubs and help the league complete the 2020-21 season.

It also concluded the extension of its long-standing broadcast partnership with BT Sport and reached an agreement to extend PRL's involvement in European competitions for the next 10 years.

"After a huge effort by the whole team, I am pleased that we have managed to navigate the many challenges of COVID-19 and that Premiership Rugby is able to look ahead with real optimism," Childs said in a statement.

"While now is the right time for me to step back and focus on a wider range of business interests, I will remain a committed and enthusiastic supporter of club rugby as the sport completes its recovery and returns to growth in the years ahead."

After leaving his position, Childs will serve as an adviser to CVC Capital, which has been in partnership with Premiership Rugby since 2018. 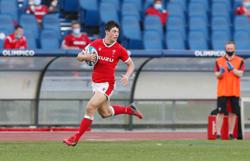