Scotland turn to Hogg to fill in for Russell at flyhalf (Reuters) - Scotland will have to do without influential flyhalf Finn Russell for Saturday’s Six Nations clash against Italy at Murrayfield with captain Stuart Hogg shifted into the role.

Russell suffered concussion in last week’s narrow home loss to Ireland, forcing coach Gregor Townsend to move his skipper from fullback to number 10 in one of seven changes as he named the team on Thursday.

It is the first time Hogg starts at flyhalf for his country with Harlequins scrumhalf Scott Steele making his first test start as his halfback partner, while Sean Maitland is moved to fullback, with Darcy Graham returning on the wing.

“He (Hogg) has covered there in the past and we believe it gives up a better balance for the team. It’s a good opportunity to see him starting there,” Townsend said at a news conference on Thursday.

Scott Cummings and Jonny Gray were also injured last weekend and are replaced by a new lock pairing of Grant Gilchrist and Sam Skinner.

Edinburgh hooker David Cherry makes his first start for Scotland with Zander Fagerson returning at prop after a four-match suspension.

Huw Jones -- who scored off the bench against Ireland -- starts on Saturday while Gloucester lock Alex Craig is set for his debut from the bench as he is called into the matchday 23 for the first time.

“How we perform physically this weekend is going to be very important, both in terms of the energy and effort that is demanded from you each time you represent Scotland, and also our impacts in every contact. Whenever we play Italy, the contact area is fiercely contested and I’m sure this game will be no different," added Townsend. 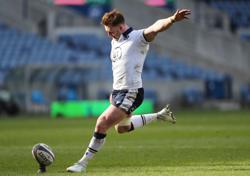 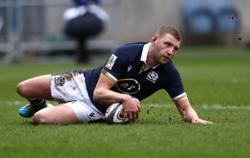