MELBOURNE (Reuters) - Emotions will be high and memories foggy when the Melbourne Rebels march out for their first match at their home stadium in 377 days on Friday, having been chased out of their digs by a maddening series of COVID-19 outbreaks.

The road-weary Rebels face the winless New South Wales Waratahs in a Super Rugby AU match at Melbourne Rectangular Stadium, a venue they last graced on March 7, 2020 when they thrashed South Africa's Lions 37-17.

The Lions win was meant to be a springboard to a maiden playoffs campaign, but instead Super Rugby was suspended due to the pandemic and the Rebels' world was turned upside down.

A second COVID-19 wave in Melbourne in mid-2020 crushed the Rebels' hopes of home games in the inaugural season of Super Rugby AU and another cluster of cases last month packed them off to Canberra for the start of this season.

Returning to the Rectangular Stadium has been an eye-opener for some players.

"We’ve got new players that until Wednesday hadn’t actually been onto the field," Melbourne Rebels Chief Executive Baden Stephenson told Reuters on Thursday.

"Some of our players weren't too familiar with the stadium. But it's great to be back."

The Dave Wessels-coached Rebels had to play all nine of their matches of last year's Super Rugby AU competition on the road.

They won four games and drew another to earn a place in the playoffs, losing to eventual finalists Queensland Reds.

With COVID-19 all but eliminated in Australia, the Rebels had looked forward to a "normal" home-and-away season this year.

That was until authorities called a snap five-day lockdown in February in response to a minor community outbreak linked to infections at a quarantine hotel.

With a grim feeling of deja vu, the team and staff packed their bags and car-pooled to Canberra to avoid being locked out of other states due to travel restrictions.

"It was an emotional old day," said Stephenson.

"The funny thing was we were due to have a team social function, a bonfire and a few beers on that night because the guys were due to finish training slightly early on the Friday and we were all going to meet up.

"To have the news that we were relocating again, it was particularly tough for the staff who have got young kids.

"Some didn’t even get a chance to say goodbye to their kids.

"While Dave Wessels and I said, ‘look, we’re going away for five days,' I think everyone knew it would be for longer. Five days turned into five weeks and here we are."

After opening the season with tight losses to the Reds and ACT Brumbies, the Rebels claimed their first win in a dour 10-7 scrap away to Western Force in Perth last weekend.

With a backline laden with Wallabies including winger Marika Koroibete and utility Matt Toomua, they have a good chance to keep the momentum going against the rebuilding Waratahs.

The 30,000-seat Rectangular Stadium is limited to 50% capacity due to COVID rules but Friday's crowd is unlikely to push the threshold.

Australian Rules football remains king in Melbourne and the Rebels will be competing with the Collingwood Magpies' opening round match against the Western Bulldogs in the AFL, a game expected to draw 50,000 to the Melbourne Cricket Ground across the road.

"My gut feeling is it's going to take a little bit of time to get some momentum on and off the field," said Stephenson.

"It’s just nice to have everyone under the same roof.

"There is a really good vibe within the club at the moment." 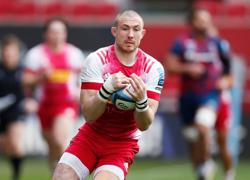