Ntamack, Vakatawa back in France squad to face England 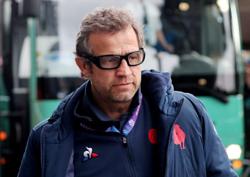 PARIS (Reuters) - Flyhalf Romain Ntamack and centre Virimi Vakatawa were called up by France head coach Fabien Galthie on Sunday to face England in the Six Nations after both recovered from injuries.

Ntamack and Vakatawa missed Les Bleus's opening victories against Italy and Ireland, with a jaw and knee injury respectively but return for Saturday's clash at Twickenham.

Scrumhalf Antoine Dupont, one of 12 players to test positive for COVID-19 after France beat Ireland 15-13 in Dublin last month, features in the 31-man squad along with six others who had also been infected.

The outbreak prompted Six Nations organisers to postpone the game against Scotland, which was scheduled to be played last weekend.

The sports ministry asked the French rugby federation (FFR) to investigate the origin of the outbreak.

The FFR concluded that the anti-COVID-19 protocols had been respected even if Galthie, who was also infected, had left the training camp and some players had left the team hotel to stroll on the streets of Rome before the Italy game.

The rules are now stricter, however, with FFR president Bernard Laporte saying on Friday that squad members would not be allowed to leave their team hotel before taking on England.

Centre Arthur Vincent has been left out of the squad, as well as winger Gabin Villiere, who sustained a hand injury in a Top 14 game on Saturday.