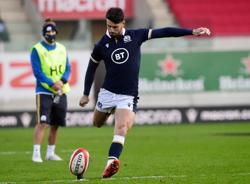 (Reuters) - Scotland flyhalf Adam Hastings will miss Six Nations games against Ireland and Italy after receiving a three-game ban for his red card in Sunday's PRO14 fixture between his Glasgow Warriors team and Leinster, the league said.

Hastings, 24, was sent off after his boot made contact with Leinster wing Cian Kelleher during Glasgow's 40-21 defeat.

A disciplinary committee reduced a six-week suspension by half due to mitigating factors, including his acceptance of foul play, remorse, and cooperation with disciplinary proceedings, the PRO14 said in a statement.

"The player is suspended from participating in the next 3 meaningful matches," it said.

Hastings missed Six Nations fixtures against England and Wales due to injury but was recalled to Gregor Townsend's squad for the game against France. However, the Paris match scheduled for last weekend was postponed after a coronavirus outbreak in France's camp.

Glasgow will be without Hastings for Saturday's PRO14 fixture against Zebre. His ban is due to end at midnight on March 21.

Scotland, who are second from bottom in the Six Nations standings with five points, host Ireland on March 14 and Italy six days later.

(Reporting by Arvind Sriram in Bengaluru: Editing by Neil Fullick) 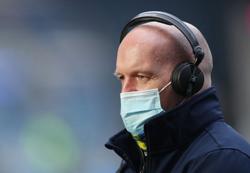 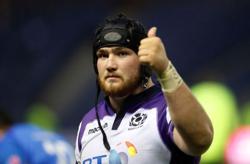