(Reuters) - England have been forced to withdraw second row Joe Launchbury and prop Joe Marler from their Six Nations squad ahead of next month's opening match against Scotland, the Rugby Football Union said on Monday.

Wasps lock Launchbury was ruled out with a fibia stress fracture, while Harlequins' Marler has withdrawn for personal reasons.

The news comes as a significant blow for England, with coach Eddie Jones' already without loosehead prop Mako Vunipola, who is recovering from an Achilles injury.

Jones has handed Wasps prop Tom West his first senior call up, while Bath's Charlie Ewels also joins the squad as a replacement.

England will meet up at the national football team's training base at St George's Park in the Midlands on Jan. 27 to begin their build-up to the opening game of their Six Nations title defence at home to the Scots on Feb. 6. 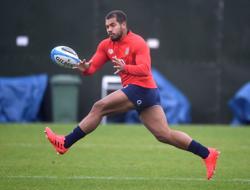