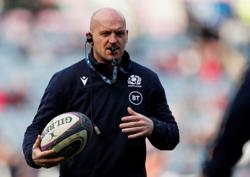 EDINBURGH (Reuters) - A lengthy rapprochement process between Scotland coach Gregor Townsend and flyhalf Finn Russell will be successfully concluded on Friday when the mercurial halfback returns for their test programme opener against Georgia at Murrayfield.

Russell was dropped on the eve of Scotland’s Six Nations opener in Ireland after “a breach of team protocol”, with British media reporting he missed training after a night out.

Russell said soon after he had no relationship with Townsend despite eight years of working with him and played no part in Scotland’s remaining games in the competition before it was halted by the COVID-19 pandemic.

However, the pair talked regularly during the lockdown, paving the way for the French-based player to return and he has been named on the bench and will likely get a chance to win his 50th cap.

The 28-year-old showed what Scotland had been missing during Racing 92’s European Champions Cup campaign, setting up a winning try in the semi-final against Saracens although a flippant moment cost them in the final against Exeter Chiefs.

Townsend said he had had no conversations about tempering Russell's maverick style.

“Any game you play there are going to be errors, especially when you are a No. 10. We don’t want to take away from any of our players the ability to seize opportunities," he told reporters this week.

“It’s great to see players having the courage to go for what they see is right. For Finn, with his skills set, those decision will be right far more often than they are not.”

Townsend said his clash with Russell has been a learning experience.

“I’ve certainly reflected on the events and what I could have done better with Finn and in my role as coach,” he said.

“It is time to put all that in the memory bank and make sure you become a better coach for the experience.”