Front row forward Oli Kebble, another uncapped South African-born player, is listed among the replacements for the warm-up international ahead of the Oct. 31 Six Nations clash with Wales at Llanelli.

Both had qualified through residency in recent weeks and been quickly incorporated into the team.

Fraser Brown will captain the side for the first time with James Lang lining up at inside centre, having last featured in mid-2018.

Townsend said he had picked his strongest possible side, including a return for Finn Russell, who will start on the bench after playing for his French club Racing 92 in their European Champions Cup final loss to Exeter last weekend.

"He has integrated well back into the squad and shown an improvement in his skills set," said Townsend about the mercurial halfback, who was kicked out of the Scottish team for disciplinary reasons at the start of the year.

Scotland play for the first time in seven months with Townsend looking for indicators for the rest of their international programme over the next two months.

"It's a game that will probably lead to what work we will have to do in training next week ahead of the Wales. We are expecting a tough physical battle with Georgia," he added. 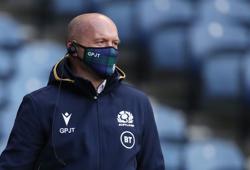