WELLINGTON (Reuters) - The franchise-based Global Rapid Rugby (GRR) competition have cancelled their inaugural season after just one round of games due to the COVID-19 outbreak, organisers said on Tuesday.

The tournament, backed by Australian billionaire Andrew Forrest, suspended the competition last month as the outbreak escalated and governments clamped down on international travel and large gatherings.

"All of our decisions around Global Rapid Rugby in 2020 have been based on expert health advice; there are global realities and challenges that cannot and should not be ignored or worked around," chief executive Mark Evans said in a statement.

"In the current circumstances (we) feel that our hand has been forced to upgrade our previous season one suspension to a complete cancellation."

GRR was set up by Forrest after the Perth-based Western Force were cut from Super Rugby following the 2017 season.

Its first two competitions in 2018 and 2019 were officially classed as exhibition seasons as organisers tested the concept.

Super Rugby was also suspended in mid-March after the seventh of their scheduled 18 rounds of competition and organisers SANZAAR are yet to determine whether they can re-start the season. Rugby-Sunwolves unlikely to be in Australia competition - Rebels CEO 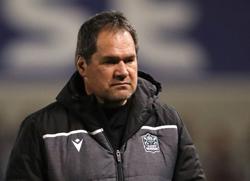