Only nine but doing fine: Adam Yoong Hanifah celebrating with his gold medal after winning the men’s tricks final in Putrajaya.

WATER skiing is the sport of choice in the Hanifah Yoong household.

It’s not surprising then to see the youngest member of the family – nine-year-old Adam Yoong Hanifah – keep the proud tradition going by claiming a completely unexpected SEA Games gold in the men’s tricks.

Defending champion Febrianto Kadir of Indonesia ruled himself out of contention for the gold with two falls to finish with 3,140 points at the Putrajaya Lake yesterday.

Another strong contender from Indonesia – 16-year-old Dimas Rid­ho Suprihono – also put up a shaky performance for only 3,440 points.

Up stepped Adam. The nine-year-old performed like a pro on both runs to finish with a 3,860-point total.

Adam’s brother – 11-year-old Aiden, who was the overnight leader after posting 3,900 in the preliminary round – then had the chance to win the gold.

Unfortunately for Aiden, the pressure got to him and he fell on both his passes to earn only 2,790 points. That handed the gold to Adam.

Dimas took the silver and Febri­anto the bronze.

The win makes Adam the youngest gold medallist in the 29th edition of the Games.

Adam, who celebrated by running straight to his schoolmates in the crowd, was delighted to be standing on top of the podium.

“This is my first gold in the SEA Games,” said an excited Adam.

“I wasn’t thinking about beating anyone’s scores today. I just went out there hoping to do my best.

“So I’m surprised and really happy to find out that I’ve won after it ended.”

Adam’s surprise gold means Malaysia finished with a 4-1-2 haul – a step up from the 2-2-3 finish in Singapore two years ago. 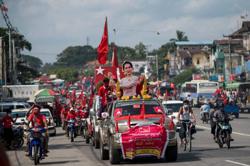