KAJANG: Former track queen V. Angamah, who will retire from teaching on June 16, is ready to turn her attention to coaching schoolchildren in athletics.

Angamah, who represented the country in athletics the 1970s and 1980s, said young aspiring athletes needed to be disciplined and focused in order to succeed.

“During our time, there were no incentives for winning. We competed for the love of the sport and the nation,” she said at SM Kebangsaan Jalan Reko here yesterday.

Angamah, who hails from Jasin, Malacca, first taught at SM Puteri Wilayah from 1987 to 1994 before moving to SM SAAS Kajang.

The 56-year-old Angamah has served as a Physical Education and English teacher at SM Kebangsaan Jalan Reko for the past 10 years.

The school yesterday hosted a pre-retirement function in honour of Angamah.

Angamah’s three children have also taken up athletics. Her youngest daughter, A. Kalaiyarasi, is now a prominent 400m runner who will be representing Malacca in the Malaysia Games (Sukma) on June 10-19.

“My first two children are also involved in athletics but they only represented their school,” said Angamah, who will be among the torch-bearers during the Sukma opening ceremony. — Bernama 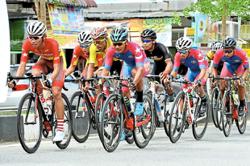 Athletes continue with training regimen at home during the MCO