KUALA LUMPUR: The Malaysian Match Racing Championship (MMRC) that doubles up as the Malaysian qualifiers for the Monsoon Cup, sets sail in Pulau Duyong, Terengganu, today with an exciting field of seasoned and aspiring local sailors, eager to stamp their mark on the international stage.

Two-time MMRC winning-skipper Tiffany Koo, who went on to become the first Malaysian woman to compete in the Monsoon Cup for two consecutive years in 2006 and 2007, will be a notable absentee but that would not deprive the championship of a woman skipper or rob the glamour of the prestigious sailing event in the country. 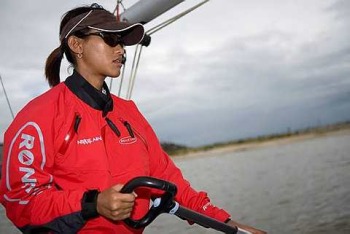 SEA Games sailor Nurul Ain Md Isa, who helms the Perak team, will be the only woman skipper and competitor among eight sides taking part in the championship that offers the winners a place in the Monsoon Cup at the same venue.

Nurul. who had represented the country in the SEA Games for the 420 Class, will not only be hoping to fill the vacuum left by the absence of Tiffany, but emulate her feat of having represented Malaysia in the Monsoon Cup for two consecutive years.

“This is my first race in the keel boat class because I am only used to sailing sport boat (Olympic class) before. For the past two weeks we trained with the Navy team because we did not have a 36-footer boat, the type used in the race,” Nurul said after arriving in Kuala Terengganu with her four male-member crew.

Another team making their debut in the championship are Sail Putrajaya, skippered by Megat Fairuz Khairuddin, who is also the secretary-general of the Malaysian Yachting Association, who has 11-years of sailing experience in dinghy and sport boat racing under his belt.

This crew comprises of sailing trainers and experts who have competed in Sukma (Malaysia Games), SEA Games, sailing school instructor and a yacht manufacturing officer.

in the race although it would be extremely difficult to handle a 36-footer boat in a Monsoon wind,” said Fairuz. Apart from Nurul’s Perak team and Fairuz’s Sail Putrajaya, six other teams — Johor, Langkawi Geopark, KFC, Terengganu, Navy 1 and Navy 2 — have confirmed their participation in the championship which has acted as

a platform for local sailors to hone their skills, since seven of the eight teams are helmed by locals, except Terengganu, who have David Mills as the skipper. — Bernama