KUALA LUMPUR: Youngster Ng Hui Lin (pic) is determined to turn her mixed doubles partnership with the hottest men’s doubles shuttler — Koo Kien Keat — into one of the most successful pairings in the country. 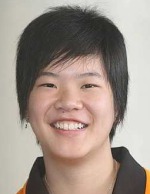 For a start, the 18-year-old Hui Lin is aiming to get it right with Kien Keat in their next three back-to-back tournaments.

The duo were tested in two tournaments — China Masters (August) and Macau Open (September) — but crashed out in the second round both times.

The early setbacks, however, have not dampened Hui Lin spirit and enthusiasm. In fact, she has attributed those two defeats to their lack of practice.

“It was only our first two tournaments together. We struggled to hit it off as a pair. But, given time, our combination can be better,” said the former world junior mixed doubles champion.

“Kien Keat is a very experienced player and we are learning to complement each other,” she said.

Prior to combining with Kien Keat, Hui Lin had played in the senior tournaments this year with her former world junior mixed doubles partner Lim Khim Wah.

Malaysia are aiming to win a medal in the mixed doubles event at the 2012 London Olympic Games.

Hui Lin admitted that the climb to the top would be steep.

“Kien Keat and I are not the best in the country. In fact, there are several other pairs ahead of us,” said Hui Lin, who admires Indonesian Lilyana Natsir.

Lilyana and Nova Widianto are the current world No. 1 mixed doubles pair.

“But we hope to be there eventually,” said Hui Lin, who is currently ranked 110th in the world with Kien Keat.