American Serena is world No.1 after third US Open title

THE drama queen came face-to-face with the comeback queen at Flushing Meadows on Sunday. Jelena Jankovic provided the on-court theatrics and Serena Williams bounced away with the US Open trophy.

Nine years after winning her first Grand Slam title, Williams collected major number nine on the same Arthur Ashe Stadium court, silencing Jankovic with a 6-4, 7-5 victory that also lifted her back to the top of the world rankings for the first time in over five years.

Jankovic had four set points to take the women’s final into a decider for the first time since 1995 but blew her chances, allowing Williams to complete a merciless charge to her third Open title without losing a set in seven matches.

“I’m so excited. I wasn’t even going for number one and it’s just like an added bonus,” said 26-year-old Williams, who hurled her racquet high in the air and bounded up and down after crunching down a backhand winner on match point. 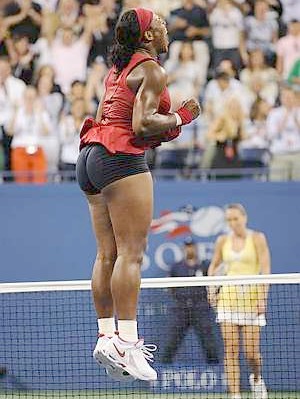 Sheer joy: Serena Williams jumps in the air after winning the US Opentitle sith a dejected Jelena Jankovic in the background. Williams won6-4, 7-5. — AFP

Andy Murray, however, was a picture of calm earlier on Sunday when he raised hopes of ending Britain’s 72-year wait for a men’s Grand Slam champion.

Murray surged past world number one Rafael Nadal 6-2, 7-6, 4-6, 6-4 in a rain-disrupted match spread over two days to reach his first major final.

While Nadal was struck by the curse of winning the Olympic gold — no man has ever won the Games and US Open titles back-to-back — the sixth seed set up a meeting in the final with four-time champion Roger Federer.

“He’s probably the greatest player ever. To get a chance to play him in a Grand Slam final is an honour,” said the 21-year-old Scot, who has a winning 2-1 record over the Swiss.

Federer, seeking to become the first man since 1924 to win five in a row in New York, beat Serb Novak Djokovic on Saturday.

A day after the remnants of Tropical Storm Hanna swept through Flushing Meadows, Murray tossed Nadal out of the tournament in a match that spanned almost 30 hours, was played on two courts and ended with the sixth seed drilling a backhand passing shot winner.

The bad weather meant it was the first time since 1974 that the women’s final in New York was not played on a Saturday.

While Williams meant business on court, Jankovic seemed to think she had a starring role in a big screen comedy film.

Williams fired a missile towards her chest, Jankovic fended it off with a self defence volley and laughed. Not satisfied with entertaining the crowd, she looked up at the big screen to study a replay of the point and laughed again.

She did the splits after chasing down the ball, she laughed, she missed a backhand, she sighed — much to the amusement of the 23,000 fans packed into the arena.

For Williams, though, it was no joking matter.

A­fter trading breaks early in the opening set, she made her intensions clear when she streaked into a 5-2 lead.

Time and again she was dragged into rallies lasting more than 20 strokes by the tenacious Serbian but the 26-year-old proved her fitness by pounding the ball back with interest.

After being foiled in her attempt to serve out the set at 5-3, she pounced in the next game when Jankovic smacked a forehand long.

The Serbian refused to get deflated and was rewarded for her staying power by moving 5-3 ahead in the second set and had Williams pinned to the back wall when trailing 0-40 on serve.

Prowling the baseline with sweat glistening on her forehead, Williams bludgeoned ferocious groundstrokes to save three set points and one more in a marathon 10th game that lasted 11 minutes before the American broke on her sixth attempt, ending A a 22-shot rally with a bone-rattling forehand.

That appeared to take the fight out of Jankovic and 14 minutes later a jubilant Williams was bouncing up and down so high, Olympic high-jump gold medallist champion Tia Hellebaut would have been proud.

Serena’s triumph was also a testament to her longevity because her last reign as world number one was in August 2003 — the longest ever gap between stints as number one for a woman.

Murray, leading two sets to love but a break down in the third when torrential rain halted play on Saturday, relied on his tactical nous to overcome a 5-0 losing record against Nadal.

Standing at least 4m-5m behind the baseline to receive Nadal’s serve, the Scot kept piling on the pressure.

Like a pesky bee, Murray kept hovering around Nadal and delivered the final sting when he earned match point by winning a 22-stroke rally with a forehand volley. Thirty seconds later, Murray closed his eyes in disbelief. — Reuters