KUALA LUMPUR: National number one Ong Beng Hee will fork out his own money to fly in coach Jamshed Gul to help him prepare for the World Open, which will be held in Manchester from Oct 11-19.

The Pakistani, who guided Beng Hee to bag the Kuala Lumpur Open in March and the Malaysian Open in July, has returned to his country after his contract with the Squash Racquets Association of Malaysia (SRAM) expired on July 31.

Under the charge of the 46-year-old Jamshed, Beng Hee also broke into the top 10 of the world rankings for the first time in more than five years.

The SRAM have recommended a renewal of Jamshed's contract to National Sports Council (NSC), who have yet to make a decision. It is learnt that Jamshed, who was hired by the SRAM last year, had asked for an increase in salary. 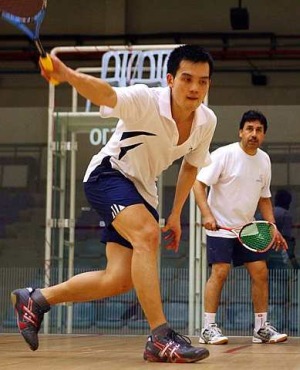 The chosen one: Under Jamshed's (right) guidance. Beng Hee is now back in the top 10 of the world ranking.

Beng Hee, who is now the world No. 9, said: “Jamshed is a coach of calibre. He helped me improve on my game and I managed to win two titles. I am also now back among the top 10 in the rankings after 67 months.''

The last time Beng Hee broke into that bracket was in January 2003 at No. 8.

Beng Hee added that he was surprised over why the NSC had yet to approve an extension of contract for Jamshed, who had a proven track record in helping national players improve on their game and rankings.

“I have never done well in the World Open and I need his guidance to help me give my best,'' said Beng Hee, who has never got past the quarter-finals of the championships.

Beng Hee said that he had decided to pay for Jamshed's flight ticket and also for his board and lodging here for four weeks.

“Jamshed has agreed to help me and he is expected to arrive here next week,'' said Beng Hee, who has just recovered from a groin injury he suffered in the second round of the Cairo Open early this month.

“I did not train for three weeks and only started doing light training today (yesterday). I need to improve on my fitness and game and with Jamshed's help I am confident of doing well in the World Open.”

Beng Hee will return to London at the end of next month to continue his preparations for the World Open.