BEIJING: China's state sports system certainly has its critics but many of those who have benefited from it are convinced it remains the secret of their country’s sporting success.

There are 23,000 state-supported athletes in the pyramid structure that makes up China’s sports system and every gold medal the hosts claim at the Beijing Olympics will be a product of it.

At the base of the pyramid are schools like Shichahai in central Beijing, where children as young as six undergo training and dream of becoming the world champions of tomorrow.

“I want to play for China in the Olympics,” 12-year-old Beijinger Yu Jingjing said on a visit to the school. “I want to be like Zhang Yining.” 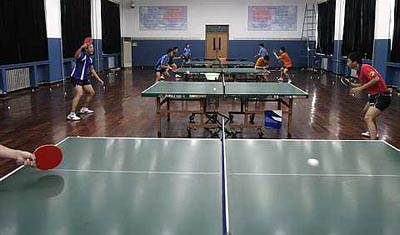 The few: Table tennis players going through their paces at the Xiannongtan Sports School in Beijing. About 300 athletes currentlyundergo regular training in the school. Zhang Yining, who won gold medals in the women’s singles and doubles events during the Athens2004 Olympic Games, was a student of the school. — Reuters

With the exception of Hollywood martial arts star Jet Li, table tennis player Zhang Yining is probably the most famous of the graduates of a school that has trained six Olympic champions, and is a typical product of the system.

“I have never bought a single bat or pair of shoes since I started playing table tennis at the age of five,” Zhang, who won two gold medals at the Athens Olympics, has said.

“Everything was taken care of by the country and I have never worried about other problems, I only need to concentrate on table tennis.”

One of over 200 model sports schools, Shichahai coaches more than 600 students in eight sports and at the same time provides them with basic general education.

About half the students pay their own way while the other half are the “professional reserves”, who have all their training, academic and accommodation expenses covered to the tune of about 30,000 yuan (US$4,000) a year each.

“The government invests a large amount of money in our school every year,” said headmistress Shi Fenghua.

Trials are held annually to bring in new athletes to replace those who fail to make the grade as well as to allow coaches of provincial and national teams to scout out the talent.

The best students from the sports schools join provincial teams as “registered state athletes”. The very best, like Zhang, join the national teams and represent China on the international stage.

In popular sports like table tennis, getting through to the professional ranks is extremely tough.

“We grew up under huge pressure, competing with each other,” twice Olympic gold medallist Wang Nan said recently.

“None of us was an easy winner,” she added. “We have to be the strongest to survive the fierce internal competition.”

For athletes like Zhang and Wang, elevation to the national team and international success brings fame and relative wealth but it is the future of the many who fall by the wayside that has been the focus of criticism of the system.

Dong Jiong, Atlanta Olympic badminton silver medallist and another of Shichahai's 32 world champions, has said a high percentage of athletes are left without education or sufficient literacy and social skills.

Training for six hours a day does not leave much time for academic study, especially in a country where those hoping to reach China's top universities regularly study from seven in the morning to midnight or later.

Ye Qiaobo, China's first Winter Olympic medallist and now an adviser to China's parliament, made a raft of proposals earlier this year aimed at improving the system.

“If we don't change things, parents will be unwilling to let their only child go into sport,” said the former speedskater.

At Shichahai, school-age students now undertake academic study in the morning, ensuring they are able to continue normal education if they fail in sport.

“When we find a student is not talented enough we'll let him or her concentrate on academic lessons and give up being a professional athlete,” said headmistress Shi. – Reuters