KLAGENFURT: Croatia striker Ivan Klasnic needed two kidney transplants to save his life last year and on Monday he savoured a perfect comeback to top level football after scoring the winner in a 1-0 Euro 2008 defeat of Poland.

“This is the beginning of my second footballing life and I was proud to be on the pitch today,” said an emotional Klasnic.

“I am happy to be just playing soccer again and I thank God we won today and finished top of our group,” he said. 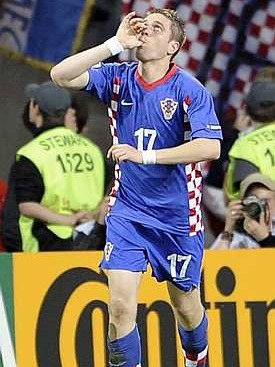 Giving thanks: Croatia's Ivan Klasnic celebrates after scoring his side's goal against Poland on Monday. - AP

Klasnic’s body rejected his mother’s kidney in January 2007 before his father donated his own for a second, successful transplant in March the same year.

The 28-year-old Werder Bremen striker returned to action last November and was recalled to the Croatian national team in March. He said Croatia’s performance and victory against Poland showed the depth of coach Slaven Bilic’s squad.

“It proves there are no second string players in this unit and that our coach can count on any of us to step in and live up to expectations,” he said.

Bilic, who started with nine reserves to rest the bulk of his first-choice players for Friday’s quarter-final clash with Turkey in Vienna, praised Klasnic’s fairytale return.

“We all prayed for him after learning of his illness and he showed such remarkable courage because he was comforting us whereas it should have been the other way round,” he said.

“To return to a major tournament like he did today is a fairytale and he deserved it. It was a fantastic performance by the lads and I am really proud of the way we continued our winning streak. We prepared for this game as if our lives depended on it.”

Croatia sealed top spot in Group B with wins over Austria and Germany before the Poland game and Bilic said the 2008 line-up would be remembered as a great team.

“We are one game away from the semi-finals and repeating the 1998 success, when we finished third in the World Cup in France,” said Bilic, who played in the team that shone in their second major tournament as an independent country.

“Of course you need a bit of luck in the knockout stages and if we have it on our side, we can beat anybody. Whatever happens, this lot will go down in history as a great side.” – Reuters