Portugal's Scolari steels himself up for clash with the most likely opponents, Germany

BASEL: Portugal boss Luiz Felipe Scolari is steeling himself for a Euro 2008 quarter-final showdown with Germany here on Thursday.

Although the Portuguese could also face Austria or Poland, Scolari made it clear he expected the Germans to bounce back from a below par display in their defeat by Croatia to clinch second place in Group B. 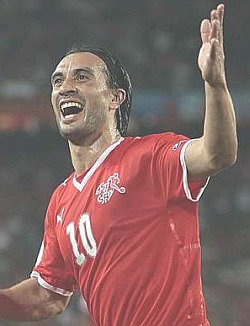 On target: Switzerland’s Hakan Yakin celebrates after scoringagainst Portugal in a Group A match on Sunday. The striker nettedboth goals in his team’s 2-0 win.

That would put them into a last eight meeting with the Portuguese, who were already sure of topping Group A before a second string side was beaten 2-0 by Switzerland here on Sunday night.

Asked if he felt, Germany were no longer to be feared, Scolari replied: “Not at all, I like the way Germany plays. I like their tactics, the way the players perform.

“You should not forget that even in the hardest moments the Germans defend their pride and make a huge effort and manage to recover in matches where they are under perssure.

“The Croatia game was not a typical match for Germany. We know that, if we have to face Germany, we are going to have a very tough time.”

Portugal will definitely have the advantage of fresher legs whoever they face with Scolari having made eight changes to the side that beat the Czech Republic 3-1 in midweek to clinch top spot in the group.

After seeing his side beaten by Hakan Yakin’s second-half double, Scolari said he wished he had changed the entire line-up.

“They played normally and we had a few opportunities but we did not score the goal we wanted and later on we saw the consequences of that,” Scolari said.

“I could not have imagined (the match finishing) this way. I should have been more careful and replaced 11 rather than eight.”

Scolari’s frustration was partly a result of the fact that four of his players, including first-choice full-back Paulo Ferreira, picked up yellow cards which could leave them vulnerable to being suspended for the semi-finals, though, if they emerge from the quarter-finals without a booking they will be wiped off after UEFA ruled on that last month in Moscow.

Despite the wholescale changes, Portugal still showed enough flashes of the quality that has made them one of the tournament favourites to have put the match beyond reach before Hakan latched on to Eren Derdiyok’s flick to fire the 71st-minute opener through the legs of Portuguese goalkeeper Ricardo.

Then, with seven minutes left, Tranquillo Barnetta was pulled down by Fernando Meira and Hakan slotted in the penalty to make sure Swiss coach Jakob Kuhn’s international career ended with a victory.

“I’m very pleased that we were able to give this gift to the fans,” Kuhn said. “But of course there is a bit of sadness because we deserved to take at least a point from both of our first two games and it now looks as if that would have been enough to qualify us for the quarter-finals.”

In the absence of Cristiano Ronaldo and Deco, Ricardo Quaresma seized the opportunity to show that Portugal’s reserves of skill run deep with an outrageous piece of trickery to create his side’s first chance, in the 8th minute.

Shaping to cross from the left of area, the Porto winger swung his right boot around the back of his left leg to deliver the ball, with astonishing accuracy, to the near post. Sadly Helder Postiga’s finishing was not of the same standard and the striker’s header comfortably cleared the bar.

Pascal Zuberbuhler was making his last international appearance in the Swiss goal and he was given the opportunity to demonstrate his reflexes remain sharp at the age of 37 when he turned Nani’s freekick onto the bar after it had taken a wicked late deflection off Pepe.

Switzerland went close with a long-range effort from Gokhan Inler and a Hakan header before the break.

Portugal’s best chances fell to Postiga, who had a first-half shot from 12 yards blocked by Philippe Senderos, and Nani, who struck the post after he had been left with only the goalkeeper to beat seven minutes after the restart. – AFP