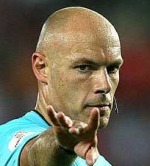 LONDON: Howard Webb (pic) was at the centre of a vicious hate campaign on Friday.

Unbelievably, it was triggered by Poland’s Prime Minister Donald Tusk.

The country’s leader confessed he wanted to “kill” after English ref Webb awarded Austria a 93rd-minute penalty in Thursday’s Euro 2008 clash against the Poles.

Another senior Polish politician called Webb a “disgrace” and a “fraud”.

Tusk whined: “As the Prime Minister I have to be balanced and collected. But on Thursday night I was speaking very differently about the whole thing. I wanted to kill.

“Referees make mistakes and this was an obvious error that harmed us all.”

His comments sparked an avalanche of hatred across Poland, with vile messages on Internet sites calling for Webb – England’s only representative at the tournament – to die.

They even printed his home address.

Webb has been promised police protection on his return home from the championship.

A spokesman for South Yorkshire Police – Webb is a sergeant in Rotherham – said: “We have been made aware of the threats.

“If they are genuine, we will be investigating them and trying to locate the sites.

“Our boys will be in touch with Howard. We are ready to do everything necessary to provide security for him and his family.”

The Austrians snatched a 1-1 draw thanks to the spot-kick, effectively booting the Poles out of the tournament.

Polish Minister of Sport Miroslaw Drzewieki weighed in, branding Webb “a fraud, not a referee” and claiming: “It’s a disgrace for the championship.”

Poland were leading at the Ernst Happel Stadium in Vienna until those final seconds.

Then Webb opted to penalise Mariusz Lewandowski for holding Sebastian Prodl’s shirt and Austria’s Ivica Vastic scored from the spot.

It prompted Poland coach Leo Beenhakker to accuse Webb, who is making his debut at a major championship, of trying to steal the limelight and prove he was “a big boy”.

But Webb, at 36 the youngest of the 12 referees officiating, insisted: “Some decisions are controversial whichever way you call them.

“It’s not being the star of the show. I never want to be that. But sometimes you have to be prepared to stand up and be counted and make big, unpopular decisions if you have to.”

UEFA, who have pledged to increase security if necessary in the wake of the threats, have defended Webb.

Spokesman William Gaillard said: “We don’t think it is controversial that a player is pulled down by the shirt and a penalty is given.

“The referee’s decision was certainly within the laws of the game.”

Webb is set to referee a second match, most likely Greece vs Spain or Russia vs Sweden next Wednesday. – The Sun, London