Germany, Croatia trying to outwit each other ahead of crunch match

TENERO (Switzerland): Forecasting Germany’s line-up for an upcoming match resembles the method used by the Kremlinologists during the Cold War – it’s mostly guesswork based on a few precious hints.

It’s no different before today’s game in Klagenfurt between Germany and Croatia, which might decide who will win Group B at the European Championship.

“Not many changes will happen, but one or two players may be new, we’ll see,” Germany coach Joachim Loew said. “We have a deep team and some younger players are pushing vehemently in practice for a place in the starting line-up.”

Loew would have little reason to change a winning team that beat Poland 2-0 in their opener. Croatia are also coming off a win, a meagre 1-0 decision over Austria that earned the Croats little praise at home.

Germany captain Michael Ballack thought his team had reached about “80-85%” of their potential in the game against Poland and saw no great need to change anything. 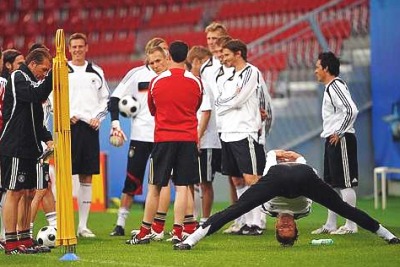 Relaxed mood: German goalkeeper Jens Lehman stretches next to his team-mates during a training session in Klagenfurt.-AFP

“I don’t see that any changes are needed. But of course, it’s up to the coach – and it depends on the rivals as well. Maybe we’ll change one or two positions,” he said.

One possible indication of the coach’s thinking came when team officials presented Arne Friedrich at the news conference the day before the match. Sometimes – but not always – this means the invitee could also end up playing.

Friedrich is a defender who can play centrally or on the right flank. The only German player who was had some weaknesses against Poland – and they were not many – was left-back Marcell Jansen.

If Friedrich came in for Jansen, Philipp Lahm would move to the left, the side he likes less, and Friedrich would play right.

Loew may stick to the old wisdom of never changing a winning team. By starting Lukas Podolski in the left midfield instead of his usual position as striker, Loew pulled a masterstroke. Podolski scored both goals and is likely to play in the same position again.

Croatia and Germany are 1-1 at major tournaments. Germany won a bruising quarter-final match in which Croatia finished with 10 men at Euro 1996, when Germany went on to win their third European title.

Two years later, Croatia paid back by routing the Germans 3-0 at the quarter-finals of the World Cup.

The Germans were not the only ones playing mind games.

“It is possible that one or two changes will be made,” Croatia coach Slaven Bilic said.

Loew and Ballack both have high opinions of Croatia, who twice beat England in qualifying. Loew praised Croatia as a “refined” team, with “excellent players” who know how to change the pace of the game and slow it down – a game plan Germany sometimes find difficult to overcome.

“They will be more offensive. They are very ambitious. They want to win the title,” Ballack said. “And they beat England twice (in qualifying).”

Bilic said: “We are quite confident. We are a good team. But Germany are a tough nut to crack. After all, they are the tournament’s favourites. Physically and mentally, we are ready. Only, we have to play much better than against Austria in the second-half.”

Bilic has indicated that he may insert Schalke midfielder Ivan Rakitic for striker Mladen Petric, who plays for Borussia Dortmund.

Star playmaker Luka Modric feels that his team are not clear underdogs.

“We have a lot of self-confidence, and despite the poor second half against Austria, I’m convinced that we can do well against Germany,” Modric said. – AP