TENERO: Germany manager Oliver Bierhoff says the Euro 2008 side can emulate their Euro 1996-winning predecessors after finally breaking their 12-year winless streak in the competition.

When Bierhoff scored the golden goal which won the Euro 1996 final, giving Germany their third European title, few Germans imagined it would be another 12 years before their side would again win another Euro Championship game. 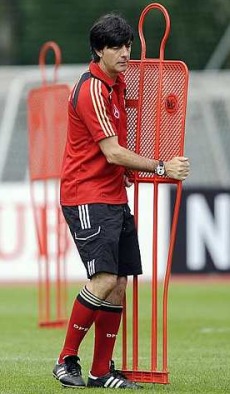 Back to the grind: Terengganu’s Abdul Manaf Mamat (centre) in action in the Sukma football finalagainst Perlis on Sunday. He is one of the 11 Sukma players in Terengganu’s Malaysia Cup side.

But having returned home early - and winless - from both Euro 2000 and 2004, the German public was restless for victory before Sunday’s Group B win over Poland in Klagenfurt, but their team delivered an impressive 2-0 victory.

“I am happy we have broken the jinx and all the preparation work has paid off,” said a relieved Bierhoff on Monday.

“We can be happy we had a good start to the tournament, it will give us self-confidence and security, but we haven’t reached our goal, there are two very important games left to play.

On Sunday, around 26 million Germans tuned to watch Bayern Munich forward Lukas Podolski score both goals against Poland to kick-start their Euro campaign.

With games to follow against Croatia tomorrow and Austria next Monday, Bierhoff says the current side have the same hunger to win.

Germany are chasing their fourth European Championship title having also won in 1972 and 1980, as the then West Germany, and Bierhoff said the squad have the same attitude as the squad enjoyed 12 years ago.

“I think in 1996, we were a very results-orientated group, very focused, very determined,” remembered Bierhoff.

“We had a lot of experienced players, some had enjoyed success with their clubs, some had won the 1990 World Cup.

“The same thing can be said now, the players are focused and some have achieved individual success, but there is a real hunger to claim the trophy, just like there was in 1996.

“There was a tremendous sense of confidence before the Poland game, sometimes players can get jittery and it can either help or hinder their performance.

“But there was none of that before, everyone was calm and focused.”

Should Germany reach the final in Vienna on June 29, the majority of their games will be played in Austria, yet their base is here in south Switzerland, which demands a one-hour flight for each group game.

Bierhoff defended the decision to base the team at a hotel in nearby picturesque Ascona even though Germany will have travelled a reported 4,000km if they win the final.

“We had to weigh up between keeping the team in the bustle of a city compared to the tranquil peace and quiet here,” said Bierhoff.

“We wanted to give the players the location and the setting to relax, they will be working hard, so we wanted to make sure they could also unwind away from distractions.

“It was a case of weighing up the pros and cons, we decided travelling was the lesser of two evils.”

But centreback Per Mertesacker summed up the situation from the players’ perspective:

“The location is great here, we have so many opportunities to relax and if we win the final, where the team were based will not be an issue.” – AFP