Robin all set to fly again

LAUSANNE: Robin van Persie has an outside chance of making Holland’s European Championship opener against Italy after making it through his first full training session on Wednesday.

The Arsenal forward has been carrying a thigh strain but coach Marco van Basten is keen to have him available to play in Monday’s opener against Italy even though he has a wealth of creative talent to pick from.

Van Persie is seen as a special player – one who can turn a game with a single move.

“It is good to be back,” Van Persie said, admitting the 90-minute training session had left him drained.

But Van Basten loaded his comments on the winger with so many provisos that it would be more logical to see him as a substitute against the world champions in Bern.

“If Van Persie trains incredibly well, then it could possibly be decided that we let him play,” Van Basten said. “We have to wait and see.” 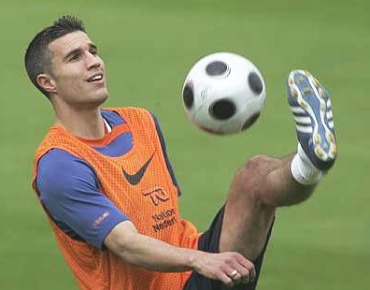 Back in action: Robin van Persie seems to be enjoying himself after being declared fit to play during the Dutch training session at Lausanne, Switzerland.

Van Persie said he would have little doubt if he had to make the choice.

Light-footed as ever, he juggled the ball with ease and in an intra-squad practice, he scored and assisted on goals.

With the Real Madrid trio of Wesley Sneijder, Arjen Robben and Ruud van Nistelrooy and Hamburger SV’s Rafael van der Vaart also available, the Dutch may not take too may risks with the tender thigh of Van Persie.

The 23-player squad is at its fittest since convening camp two weeks ago, increasing confidence they could survive the tough Group C, which also includes France and Romania.

Both Italy and France are facing injury worries, and the world champions have to realign their vaunted defence after captain Fabio Cannavaro tore ligaments in his left ankle and had to be operated on Wednesday.

“It may be good for us, but it is sad to see him go. He was a fundamental player for the team,” Van Basten said.

France too is struggling, and might not have a fully fit squad when they face the Dutch in the second game on June 13.

Having scored six goals in two victories and a draw in three preparation games, the Dutch know they have the creativity and firepower up front to beat the best.

Also with good play from Hamburger SV’s Nigel de Jong in defensive midfield during the warm-ups, Van basten was able to let everybody guess how his line-up would look.

The defence has been criticized as being too weak to face powerhouses like Italy and France, despite only conceding five goals in the qualifying group and one in three warm-up games.

“De Jong left a great impression. As a team, it only gives us more options,” Van Basten said.