BARCELONA: Defending drivers world champion Kimi Raikkonen extended his lead in this year's title race to nine points yesterday when he drove to a comfortable victory in an incident-filled Spanish Grand Prix.

The Finn, driving a Ferrari, led from start to finish, bar the pit stops, to dominate the contest and consolidate his and his team's position as the in-form outfit after four races this season. 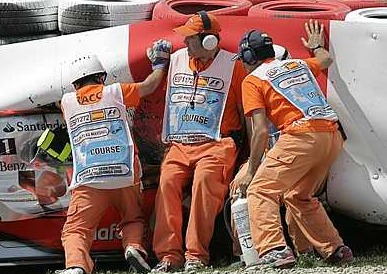 Quick action: Rescuers pushing the track walls up to release HeikkiKovalainen and he is (below left) brought to safety after he crashed duringthe Spanish Grand Prix at the Circuit de Catalunya yesterday. — AP

Raikkonen's win was his 17th in a career often beset by bad luck in earlier times and endorsed the wideheld feeling that he has happier at Ferrari and in the form of his life.

His Ferrari team-mate Brazilian Felipe Massa drove a solid race to finish second, after starting third on the grid, ahead of Briton Lewis Hamilton in a McLaren-Mercedes.

But Hamilton's team-mate Finn Heikki Kovalainen produced the day's most spectacular and worrying moment when his car suffered a front-left puncture at 240kph.

He lost control and flew off the track into a tyre barrier.

It took five minutes to pull his car clear and lift him out on to a stretcher, but he was later declared to be uninjured and stable after being taken to the medical centre - though he was flown to a local hospital as a precautionary measure.

Poland's Robert Kubica continued his fine form by finishing fourth for BMW Sauber ahead of Australian Mark Webber in a Red Bull and Briton Jenson Button in a Honda. 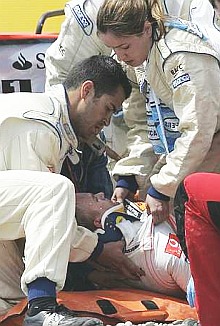 Home hero Fernando Alonso of Spain was forced to retire in his Renault after blowing the engine. He started an unexpected second on the grid, but failed to match that in front of a crowd of more than 115,000 spectators at the Circuit de Catalunya.

Raikkonen made a fast, clean start to take the lead from his 15th pole position and first this year.

Behind him, his Ferrari team-mate Massa went left and wide to pass Alonso on the outside as they swept towards the first corner.

The big sun-bathed crowd of 115,000 spectators crowded into the Circuit de Catlunya gasped in disappointment, but there was nothing that Spain's double world champion could do to prevent the Brazilian passing him with sheer speed.

Hamilton, starting fifth, took advantage of the cars swerving in front of him to spear down the inside of Kubica and, after almost running off the circuit, to squeeze ahead of him on the inside of turn one. For both men, their aggression paid off.

On the same lap, the opening one, however, there was drama when German Adrian Sutil spun and then hit his compatriot Sebastian Vettel, the Force India car smacking the Toro Rosso with enough force to wreck both of their races.

This brought out the Safety Car for two laps before Raikkonen began his charge again, opening up a clear 2.7 seconds lead by lap 10 ahead of Massa as the two Ferraris ran away at the front.

Another accident on lap eight ended the hopes of both Nelson Piquet and Sebastien Bourdais, the Brazilian driving his Renault into the second Toro Rosso when he attempted an outrageously ambitious passing move down the inside.

The Frenchman retired with a shrug and soon afterwards was joined by Briton Anthony Davidson who abandoned the race in his Super Aguri car. For the cash-starved Honda-supported team, it was a minor catastrophe in a season of worry - they do not know if they will survive for more than another week. – AFP