PETALING JAYA: Malaysia have a handful of first-timers in their teams for the Thomas and Uber Cup Finals, which will be held in Jakarta from May 11-18.

And chief coach Yap Kim Hock hopes that the debutants will not turn out to be the weak links in the bids to reach at least the semi-finals of both the Thomas Cup and Uber Cup competitions. 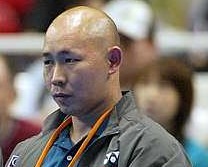 Kim Hock: Hoping debutants will not turnout to be weak links in the Finals.

Kim Hock is hoping that a three-day team-building camp in Port Dickson from May 2-4 will do the trick to build up the team's confidence and also unity among the players. Both the men's and women's teams for the Finals will begin centralised training in Bukit Jalil today.

“Most of the first-timers are youngsters. But they have showed that they have quality in their games. We, the coaches and their team-mates, must inject confidence in them. These players must believe that they can also rise to the occasion,” he said.

Kien Keat and Boon Heong will be playing in the Finals for the first time as a pair. In the previous Finals in Japan two years ago, Kien Keat partnered Chan Chong Ming while Boon Heong was the reserve doubles player together with Chew Choon Eng.

For the Uber Cup, Wong Mew Choo, Julia Wong and Chin Eei Hui-Wong Pei Tty were in the team when Malaysia last made the Finals in Jakarta in 2004.

The others in the team for the Finals this time are Lim Pek Siah, Lydia Cheah, Tee Jing Yee, Ng Hui Lin, Goh Liu Ying and Woon Khe Wei.

Pek Siah has vast experience but was not in the team for the 2004 Finals because she had quit the national team to join professional outfit KLRC Bhd.

“When we start the centralised training tomorrow, all the players will train together in Bukit Jalil in the morning but the coaches have been given the permissions to have their own programmes, court or physical training, in the afternoon,” said Kim Hock.

“That is why I consider the three-day camp in Port Dickson as a very important platform to strengthen team unity and self-confidence. There will be no badminton during this three-day camp. The debutants and experienced players will get to mingle and motivate each other.”

Malaysia last won the Thomas Cup in 1992 in Kuala Lumpur. The best result for the women's team in the Uber Cup was a quarter-final appearance in Jakarta in 2004 when they qualified for the Finals on merit for the first time.