Azlan battles fatigue to rewrite his own 400m hurdles record

Azlan achieved his feat in dramatic fashion. The Terengganu lad collapsed on the track after hitting the tape first in 53.62, erasing his own mark of 54.45 set at the National Stadium in Bukit Jalil last year.

He suffered cramps in both legs and had to be stretchered out. He also vomited a few times. The Form Five student of SM Paka in Dungun said: “I wasn’t feeling well in the morning.

“But I still competed as I wanted to retain the title. I was exhausted after winning the heats in the morning. In the final, I gave it my best and I was surprised that I managed to rewrite my record.”

Eldy Sham Irlon of Sabah clocked 55.13 for the silver while Kelantan’s Mohd Hafizuddin Ismail took the bronze in 55.98.

Azlan, who is trained by former Olympian Ishtiaq Mubarak, won the gold medal in the Asean schools championships in Jakarta last year. 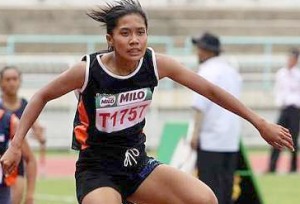 Norisah credited the win and record, to her coach Kamarulzaman Yusuf.

In the boys’ Under-15 200m hurdles final, Baihaqi pipped favourite Mohd Ajmal Aiman Mat Hassan of Terengganu to hit the tape in 25.66, beating the old mark of 25.92 set by Mohd Rosmady Kamaruzaman of Kelantan in 2003.

Ajmal, who broke the 110m hurdles record on Thursday, took the silver in 25.67. Perak’s Mohd Herwan Shah Ramli bagged the bronze in 26.34.

Baihaqi was delighted to have beaten Ajmal to the gold and improved on his personal best by more than two seconds.

“I never expected to break the record as I only managed to clock 27.99 in the state schools meet in Kota Baru recently. This is my best achievement as it is only my second appearance in the MSSM meet,” said Baihaqi.

The last record of the day came from Jacky in the boys’ Under-18 hammer event at the National Sports Council (NSC) training pitch in Bukit Jalil.